SANTA FE – The New Mexico Department of Health on Tuesday announced that William Romero of Los Alamos County is the winner of the $5 million Vax 2 the Max grand prize.

The Vax 2 the Max sweepstakes awarded a total of $10 million in cash prizes – as well as a series of other prizes – to vaccinated New Mexicans throughout the summer. This was reportedly the largest vaccination incentive program in the U.S., and was cited by President Biden as notably successful in recent remarks. A total of 571,687 New Mexicans participated in the sweepstakes, which successfully halted a decrease in vaccination numbers early in the summer.

The ongoing $100 “Stay Ahead” vaccination incentive campaign continues to significantly boost vaccination rates. In the first week of August, New Mexico has registered a 25% increase in vaccinations over the weekly average for July. The state projects that number to rise above 30% when all vaccinations are reported. New Mexico is also seeing significant increases in vaccinations among Blacks/African-Americans, Hispanics/Latinos, and 12-17-year-olds, as well as in every region of the state.

All New Mexicans 12+ are eligible to participate in the $100 vaccination campaign between August 2 and August 31. Any dose – a first or second dose of Pfizer or Moderna, or a single shot of J&J – will qualify. To qualify for the $100 incentive, New Mexicans must register at vaccineNM.org – though they can receive their actual vaccination dose at any provider in the state.

Given the rapid rise and spread of the Delta variant – which is two-four times more transmissible than previous variants – DOH encourages New Mexicans to get vaccinated as quickly as possible. 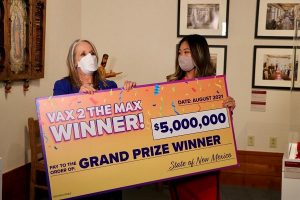